A look at Sambalpuris will provide you insights on a culture that is vibrant and delightful. The culture can be considered distinctive in the language, songs, dance and clothing that forms a part of the culture especially the ones that mark the festivities of Sambalpur. Festivals Celebrated in Sambalpur All the festivals that mark India on the global celebration map are part of the Sambalpuri culture too. But, there are some festivals that are unique to the culture and traditions of Sambalpur. It is the presence of these festivals that makes this otherwise sober and unassuming culture dynamic. Most of the festivals are celebrated in honour of a particular deity. Grand fairs grace the festivities and bring glamor to them. Communal harmony and peace combined with fun mark the gala of these festivities. Here are a few festivals that are specific to this eastern city. 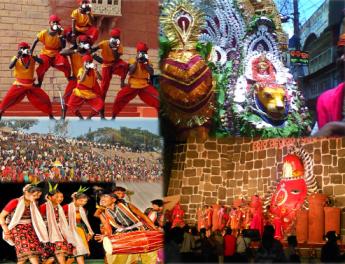 Lok Mahotsav is basically a festival organized by the Sambalpuri people annually in the honor of the people of Sambalpur. This reflects the culture, tradition and the socio anthropological evolution of the Sambalpuri folks. It showcases the age old traditions that form Sambalpur. This festival is celebrated across a period of three days. On all the three days various events grace this occasion. The various events include folk music concert, dance shows, Indian folk music, etc. The whole idea is to bring alive the culture, music and lifestyle of Sambalpur while uniting people on a single podium. Unison of peace and harmony while bringing culture alive is the main purpose of this event. In its true sense it is a people’s festival as the name “lok” suggests.

SitalSasthi is one of the most celebrated festivals which is unique to Sambalpuris. This festival is celebrated to commemorate the marriage ceremony of Lord Shiva to Goddess Parvati. This is generally celebrated across an entire week. The festival is celebrated in the month of June, almost marking the beginning of monsoon in this region. During the celebrations of this festival, pomp and joy booms across the town of Sambalpur. This festival has been celebrated in Sambalpur for more than 100 years now, and people from across India join in during the festivities. The colors are added to the dynamic festival by the artists who become a part of these festivities. Both LokMahotsav and SitalSasthi carnival are basically fairs that induce festival style in themselves. One can see that these festivals are major events of Sambalpur, and are celebrated with the same fervor that one would see during the kumbhmela.

Agriculture is the main source of income in Sambalpur. For most of the Sambalpuris, the agricultural produce runs their family and homes. Paddy is a major crop in the north eastern and eastern part of India. Sambalpur is no different in this case. Nuakhai is termed as one of the most important festivals in Sambalpur. One can see the importance from both social and economic point of view. This festival is celebrated in Sambalpur during the months of Monsoon, generally the months August and September which are considered peak for monsoon. The preliminary preparation for the festival begins 15 days before the festival is about to be celebrated by the natives of this city. This celebration is dedicated to the growth of first crops of paddy, which happens during the monsoon season. The first grains of paddy are cooked; various dishes are prepared using this paddy crop. These variety of dishes are then served to the deities. Once it has been offered to the deities, this cooked variety is served by the eldest members of the family to the junior members of the family, as part of the tradition. During this festival people meet and greet each other, and houses are cleaned as part of the ritual.

Navratri is a common tradition in most parts of India. It is celebrated in various ways in the different cultures of India. In Sambalpur, the Goddess worshipped during this festival is Goddess Durga. As part of the nine days festivities, the women grace Goddess Durga in many ways and pray to her for strength and well-being of the family. Throughout North East and East, during the period of Navratri, pandals are set up to grace the lord. Odisha also shares similar fervor during this time. Ladies dress up in new clothes, and pray during all the nine days and enjoy good food during this period. Ashtami is considered to be the most important day for the ladies of Sambalpur. On this day, the ladies of this region celebrate BhaiJuntia, girls, and married women; observe a fast for the whole day. This fast is observed for the well-being and long life of their brothers. This is considered to be a day of great devotion, and is celebrated along western Odisha.

Puo Juntia is basically a dedicated puja performed to Sasthi Devi also known as DutibahanaOsha. One would see that this festival is generally celebrated along the western regions of Odisha. On this day, mothers fast throughout the day and worship the Goddess in evening by forming small groups. Generally mothers observe this fast for the well-being and long life of their sons. But, in some cases mothers also observe this fast for their daughters. In case a woman does not have any offspring, she may fast on this festival to be blessed with a son. Puo in Sambalpuri means son. Juntia literally translates to cotton lace. A cotton lace is offered to the God. This lace is then worn by the sons who were blessed by their mothers through this fast. The next day, the mothers go to a nearby pond or river, and perform certain rites there. After the rituals are completed at the river side, the mothers return to perform certain rituals at their home. This ritual conducted at home where they place some offerings on behalf of their sons is known is Bandeibaa.

This festival is generally celebrated by the Muslim community that dwells in Sambalpur. This festival is celebrated on the eve of the birthday of Muhammad. A peaceful procession passes through the city which is a way to express solidarity among the citizens of this town.

Other Festivals in Sambalpur

Apart from these major festivals, other festivals that are a part of Sambalpuri culture include Ganesh Puja, Diwali, Durga Puja, DolaYatra, and the grand fair of Shivratri. RathaYatra is also pretty common to this region. Sikhs living in Sambalpur celebrate Guru Nanak Jayanti while the Muslims of this town celebrate Id UlZuha, Eid UlFitr and Muharram.

Comments / Discussion Board - Festivals of Sambalpur